As I mentioned in the previous post I finished up some moulds of the first batch of 1812 infantry and got casting them last night. Unfortunately all of the British regulars were miscast – the one, below, was the least messed up so I primed and painted him anyway just to see what he’d look like. (I’ve sorted out the casting issue and should be cranking more of these out shortly…). Before I get to basing and presenting entire units I’m going to have to make a flank company figure, an ensign, and an officer… and maybe a drummer…? 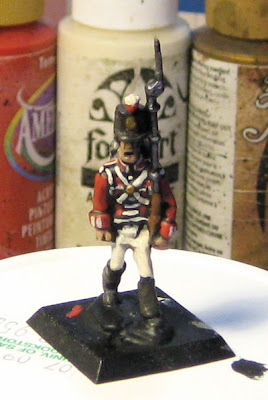 War or 1812 British Infantryman (41st Regiment of Foot) - modeled, moulded, cast and painted by yours truly… 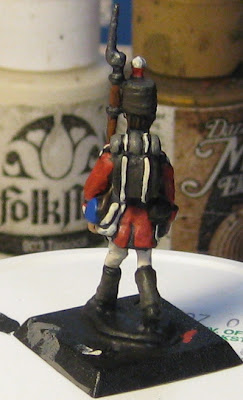 Well, obviously, I ain't no Perry Brother... but when there's a hundreds of them on the table in dense formation... who's going to notice?!

I have some more Great War Jocks on the workbench and ready for painting… but they may be eclipsed by these War or 1812 figures….

As mentioned I also have some sculpting to do (flank company figure, ensign, officer, drummer, etc…)?

Hey, I just realized it’s five years ago today that I started this blog… This is the 811th post.
Posted by tim at 12:20 PM