Once again most of my regular Saturday Savage Worlds players ditched this week so I played another game of Force on Force, this time with Rick. This game took us back to Vietnam. I’m still trying to get my head around the rules and so wanted to stick with a regular vs. Regular battle, but Rick wanted to try out some better quality troops versus a larger number of lesser quality troops. So here’s what I came up with…

A team of Australian SAS has been operating with a team from the MACV Studies and Observation Group well behing enemy lines near the Laotian border; gathering intelligence on enemy troop movements and such. On their way to the take out point they bumped into and unexpected PAVN force!

Break Contact and get to the LZ by the end of Turn 10.

I still haven’t figured these out… probably 5 for each guy that successfully makes it out, and 1 or 2 for each PAVN killed or seriously wounded….?

Capture the Imperialist Spies before they can escape!

Probably big points for each SAS/SOG team memenber killed or captured….? 5? 10!? If I were actually using the helicopters even bigger points for bringing one of those down…

Platoon commander
3x PAVN squads, each with:
-1x Squad Leader
-1x Grenadier – RPG
- 6x Riflemen – AK-47
(3rd Squad had an RPK Gunner instead of one of the riflemen) 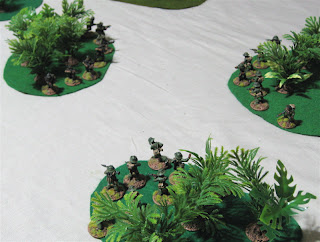 The SAS team decided to fire on PAVN Squad #2 and then move to aid the MACV-SOG team. I can’t remember who fired first, but the NVA Squad wiped out the SAS… 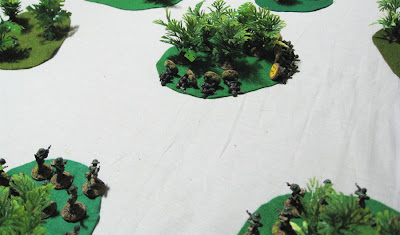 End of Turn One – Game Over: all SF personnel are down…

So we set it up and decided to try again with the SF teams having D12 for Troop Quality. Afterwards I realized what I should have actually done – more on that after the report… 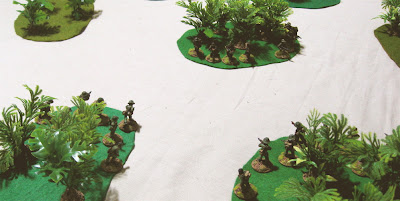 PAVN Squad #1 rolled a one bringing out the only Fog of War card in the game – There’s Something Moving Over There! a randomly determined team ( turned out to be PAVN Squad #3!) blazed away at something they saw – another American team moving in behind to surround them! After unloading all their clips into the bush a wounded wild pig trotted out, fell over and expired… 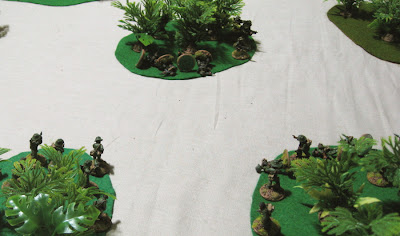 The SAS maintained the initiative.

PAVN Squad #2 checked it’s casualties and administered First Aid. They had suffered one Seriously Wounded and one Lightly Wounded. 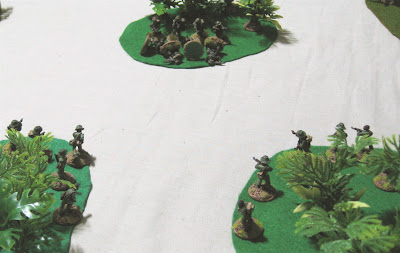 The SAS faded back into the jungle and moved over into cohesion with the MACV-SOG so they could administer first aid the following turn. Only PAVN Squad #2 had LOS and they could only react to fire so they made their move with no reactions.

I suppose PAVN Squad #1 could have done something…? Did I try to move them in to close assault but failed a Troop Quality test…? I can’t remember…

While the Australian SAS team was administering First Aid the Vietnamese wrested initiative of the situation from the Imperialist Agressors!

Upon arriving at the MACV-SOG position to administer first aid they discovered that all of them were actually okay… All of them… Just fine…. For all their screaming and whailing not one was injured… A bullet had hit the team leaders pack exploding a tin of tomato soup within splattering it all over his neighboring team member. The Team leader had felt the jerk and saw the splattering tomato soup and though it was his own blood gushing out. The neighboring team member, on the other hand, though he himself had been hit and was bleeding profusely out his head. In their flailing about they knocked a branch into the eye of a third team member and who then also though he’d been hit. Then the remaining team member had simply wet his pants when he though all his fellow teammates had been hit, and then when he realized he was wet though he had ALSO been hit and it was actually blood pouring down his leg… Then the SAS medic arrived and calmed them down.  Doing a quick triage, they took stock of themselves and realized that in fact no one was hit, they were all just fine and had a moment of uproarious laughter, which was followed by a solemn oath to never, ever speak of this incident to anyone, ever…

Beginning their activations, PAVN Squad #2 declared their intent to fire on the MACV-SOG team. The SOG team reacted by moving away – they did so successfully – passing through the SAS and out the other end of the stand of trees and bush. NO shooting for Squad #2…

PAVN Squad #1 then decided to close assault into the woods! I’ve realized, while writing this I’m not entirely sure if I would have been able to. It says in the book that “If one or more figures in a unit are within Rapid Movement Distance of an opposing unit, the entire unit may launch a charge and attempt to engage the enemy in Close Assault…” However we had declared the stands of trees, which the unit would be starting in and ending in, to be “Dense Woods”. Infantry units may only use Tactical Movement through Dense Woods…? Which takes precedence? One would think that the tactical move only would… but the wording of the close assault rules “Starts withing Rapid Move Distance…” makes me wonder…

Also… The PAVN Squad, I’ve realized afterwards, wouldn’t have had LOS to the unit. The SAS were deeper than 1” into the dense woods and thus LOS to them would be blocked… Of course it doesn’t specifically state that the target of a Close Assault has to be within LOS at the start of the move…?

Well, whether they should have or not, The PAVN charged. The SAS did a Troop Quality test and passed so decided to stand and fire. Defensive fire took out HALF the PAVN squad… but they passed their morale test and in they went! I think the first attack took out a couple SAS, The SAS fought back taking out two more of the PAVN… 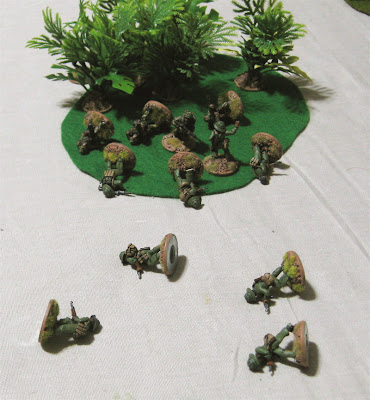 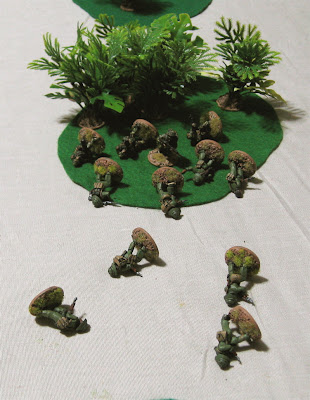 Finally the last of the SAS took out the last of the PAVN. The four PAVN that were actually involved in the close assault were diced for and all four ended up dead. The other four I wasn’t sure about – they were shot on the way in… I figured they could be left out in the open and if anyone wanted to check on them they might still be okay…

PAVN Squad #3 did a rapid move to get to near the brush where all this was going down.

The PAVN retained the initiative!

PAVN# 2 decided to split the unit and sent the two Lightly Wounded to the rear with the Seriously Wounded. 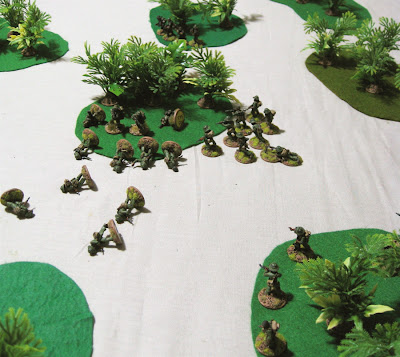 PAVN Squad #3 did a rapid move to get up where they would be close to the woods where the SAS were hanging out.

In the End Phase the MACV_SOG team made for cover of a nearby stand of trees and brush.

PAVN Squad #3 decided to activate. They were to move into the wods with the SAS – not entering Close Assault – but just entering the stand of trees and shoot them up at very close range… The SAS decided to react by shooting and then running away… I can’t remember how the reactions went… I think the SAS won the reaction so they got to fire first but were ineffective. Then, I think, the PAVN went (because they get to respond to reaction fire, because they are regulars, right…?). The PAVN’s fire wiped out the SAS. They then completed their move into the woods.

PAVN Squad #2 then also moved up to the woods. 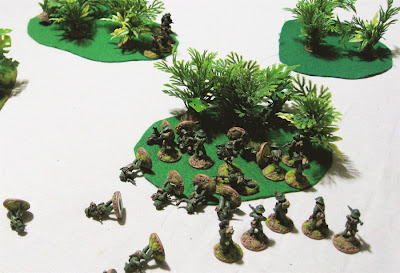 In the End Phase the MACV-SOG team moved from one bit stand of trees to antoher.

While the PAVN were sorting out SAS casualties and prisoners in the woods the MACV-SOG once again seized the initiative! The two SAS troopers injured in the previous turn’s firefight were also Seriously Wounded. All were now POWs.

The SOG team retained the initiative. 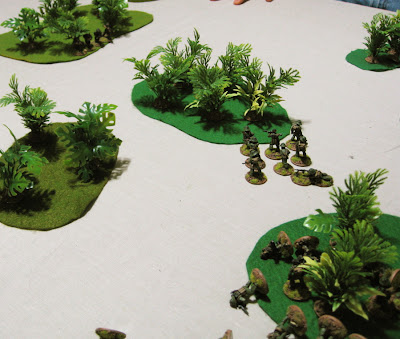 The SOG team made another dash from one bit of cover to another – not that anyone had any LOS on them.

In the End Phase PAVN Squad #3 moved out of the woods and took cover behind the wood opposite.

The SOG team still had the initiative. 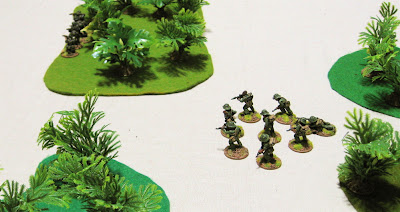 The moved to the far side of the woods they were in which brought them to the edge of the LZ.

Since I had only stated the SAS/SOG teams only needed to get TO the LZ by TURN TEN, we called it there as the next turn the SOG team would be into the LZ.

Once I figure out helicopters, it might be fun to do a scenario like this where they actually have to call a hovering helicopter down to pick them up in a hot LZ… Maybe have a gunship also hovering around to give support – blasting the tree line to keep heads down (and RPGs away from the LZ!?)

I also realized afterwards that what I should have done was to make the SAS/SOG Stealthy or Elusive – so they could have started the fist turn hidden and just tried to fad away – forcing the PAVN to throw themselves into the SAS/SOG position to find them, allowing the SAS/SOG forces to ambush them turn after turn… that would have REALLY balanced things out a bit.

Still learning… Sometimes the more I read the rules and play the game the more confused I get… They seem so intuitive… yet I can’t get my head around some things… Maybe I’m just an idiot…?

I’ve been working on a few 28mm vehicles the last couple days. Hopefully I’ll be able to finish them up soon-ish…
Posted by tim at 1:46 AM