I finished up the last of the ZANLA from Eureka Miniatures. they will probably see more action as regulars in the Peoples Revolutionary Army of Timbogo (P.R.A.T.).

The aforementioned ZANLA from Eureka Miniatures.

I’m not totally happy with the beret colour. Essentially I’d wanted black – but I rarely just paint something black – I usually highlight it a bit with a “Charcoal Grey”… Except I’d used the Charcoal grey to highlight their hair… So I’d tried using a really dark blue… then (as you see them now) a “Black Plum”… I think I may actually just go back and paint them straight black…

Just as I was finishing these up another parcel arrived from Eureka Miniatures USA with some modern US Marines and Taliban. 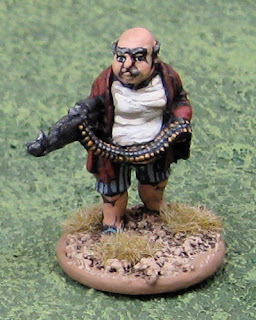 Also rolling off the workbench: a “Fat Veteran with Machinegun” from Black Cat Bases. I thought I might use him as a foreign mercenary training consultant who claimed to have past experience with the SAS (or US Special Forces… or French Foreign Legion… depending on who he was talking to… he once even claimed to be ex-Spetznaz…). He calls himself Colonel Weisz, and he only ever speaks in French – with a think Irish accent…