Nuthin' for a week and then three (maybe four) posts in one day!? You'd think I'd spread these out over a couple of days. Pfft! That'd require something like patience....


While planning all these modern forces I’m working on at the moment I started wondering (sensibly) what was I going to use at opposing forces…?

I’m in a bit of a gamer’s vacuum here. Ever since the first group of guys I played miniature wargames with split up (oh, twenty years ago… has it really been that long!?) and went their separate ways leaving me with armies with no opponents, I thought it only sensible to always do both sides. That way I’m never reliant on others. If a gaming buddy packs up and moves away, I’m no longer left with armies without opponents.

As an added benefit I can game with anyone. I don’t have to seek out other guys that have armies to play with. Anyone that wants to try out a game doesn’t have to first build an army of their own…. The downside of this is that most of the guys I now game with just rely on me to provide all the toys when we game and would never consider buying or painting any miniatures themselves….

I’m straying off topic here… What I think I was initially starting to ramble about was what to do for opposing forces for my moderns… Vietnam is obvious – Americans and Australians vs. Vietn Cong and PAVN (maybe someday I could add some ARVN or other odds and sods). I’m interested in “Cold War Gone Hot” scenarios – and so I have a few cold war British and Soviets in 28mm… (and a few slightly-more-recent-than-cold-war soviets and British, etc…) and a pile of them in 20mm… but then I also have a smattering of more modern (Post Post Modern?) British and French and Americans… but I have no interest in gaming Iraq at all and no real strong desire to do Afghanistan… So what to do?

Then I got thinking I could revive my fictional African nation of Timbogo – which I originally dreamt up for AK-47 Republic (and have a LOT of stuff for in 20mm…).  Eureka Miniatures and The Assault Group have some great ranges of Africans that I could use for the primary local belligerents: The Federal Army of the Republic of Timbogo (F.A.R.T.) and the Peoples Revolutionary Army of Timbogo (P.R.A.T.). The French and British and such could simply be used as foreign (previously colonial) powers that are required to intervene from time to time…

Oh I suppose I could put together a force of central asian insurgent types… but perhaps they’ll be the denizens of Derkaderkastan…?

Anyway, here’s the first of the Africans…. 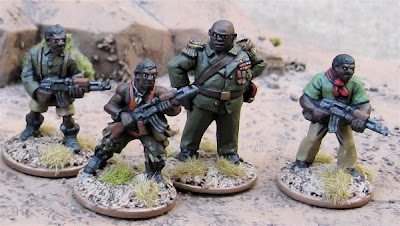 This is General Xavier Millerbutu (the “President for Life” figure from Matakishi’s Tea House) and a few Timbogan Militia from The Assault Group.

I have a one more TAG militiaman and a batch from Eureka Miniatures (ZANLA from their Rhodesian War line) on the workbench. I’ve run out of washers to base them on and have been too sick this last week to go out and get some more… Hopefully I’ll get to those this week! 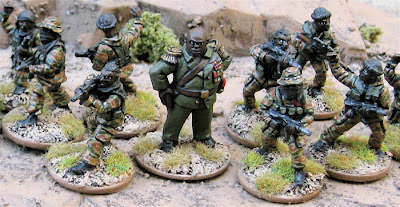 Here, again is General Millerbutu with his personal body guard “The Jackals”