Last Saturday I’d cancelled by Regular Saturday Night Savage Worlds game as it looked like no one was available… then Christian said he was, so I set up a quick Cold War Gone Hot Force on Force game to try out…

I’m still trying to get the rules straight in my head, so I probably made lots of mistakes… I was also really tired and wasn’t taking very detailed notes… so my memory of the game is a little hazy. I’ll try to do my best to describe what was going on in the pictures…

After a series of “border incidents” and a number of “terrorist bombings” within the Soviet Union, the Soviets have launched a full-scale invasion of neighboring Burkhadurkastan claiming they have been harbouring and training the terrorists operation within the Soviet Union…. (It has nothing at all to do with the recently discovered vast oil reserves in the border region of Buhdurkh).

A coalition of western nations, led by the British, outraged by the Soviets brazen infringement of Burkhadurkastan territorial sovereignty have pledged support to the beleaguered Burkhadurkastanis (whether they want it or not)! (It has nothing at all to do with BP purchasing exclusive rights to exploit the recently discovered vast oil reserves in the border region of Buhdurkh).

A British rapid deployment light role brigade has been deployed to Budurkh (despite the fact that the initial Soviet invasion had been pressing further east towards the capitol of Burkhadurkabad…?)

Elements of the Black Watch have moved into the Eastern part of Budurkh and begun hastily preparing defences for the expected soviet swing toe the west.

Occupy the village of Guburkh and prepare defences to hold off the advance elements of the invading Soviets.

BRITISH VICTORY POINTS
I can't remember if I worked out any... I certainly didn't write them down... shoudl have been something about denying soviets the village... Or maybe some target buildings on the far end of town... or something like that...

Push through the village of Guburkh and expel any resistance you encounter there.

SOVIET VICTORY POINTS
As the British Victory Points above.. really just playing to figure out rules... haven't really got me head around designing balanced objectives and forces and whatnot.

After we'd worked out who would have what, Christian decided to take the defending British and I took the attacking soviets. 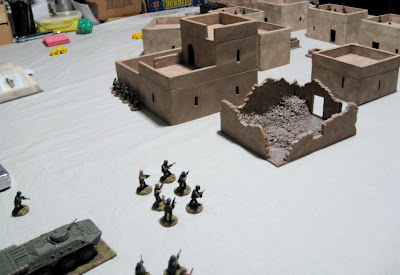 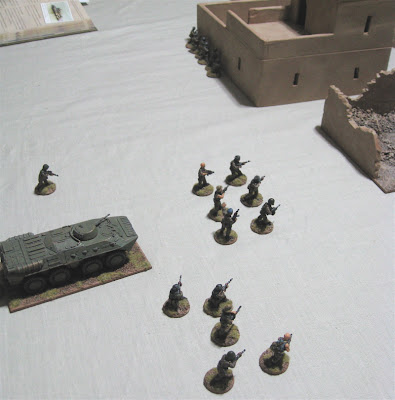 The soviets rushed to the edge of town. No reaction from the British (or Scots, actually…). 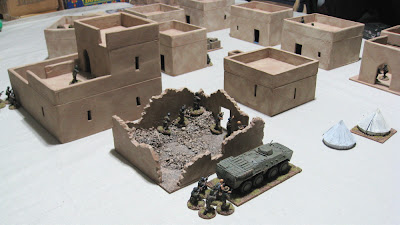 The Scots move up to new positions in the End Phase. 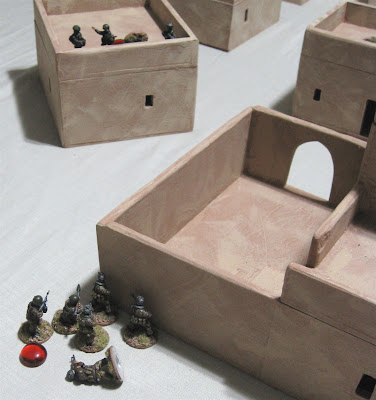 Soviets and British Exchange fire on the south end of the village. Both take one casualty, the Soviets are pinned.

The other soviets moved up taking cover in and around the destroyed building on the Northeast endge of the village. 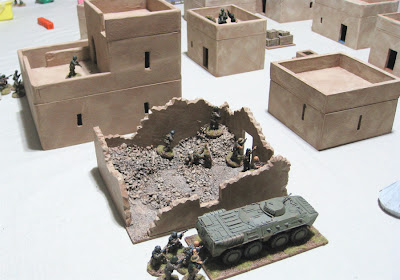 In the end phase the remaining Scots move up. More fire is exchanged with Soviets; each taking one casualty. In this round of fire Christian rolled a one bringing out the first of many Fog of War cards. I can’t remember which it was… it must not have had much effect. We haven’t had many in the previous games. In fast I think there were more FOW cards drawn in this game than in all the previous Force on Force and Tomorrow’s War games…

Oh, it might have been “Brats and Schnapps” a NATO fire team that’s out of LOS of higher command takes a turn out to sample local culinary culture. No one was, so we ignored it…

There was some attempt at exchanging of fire in the middle of town – which brought out another FoW card – Air Strike – an Su-25 Frogtfoot operating in the area decided to help out and dropped a bomb on the building in the center of town where the British were firing from – wiping them out. 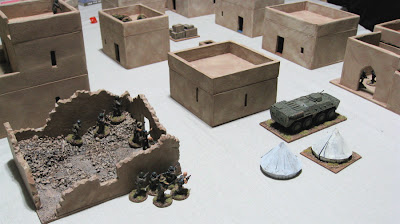 With the threat in the center of twon reduced the BTR-80n moved up.

I have noted that the soviets did a first aid check and had two more seriously wounded…? Though I’m not sure WHERE they took those casualties…?

The British Medic (along with the Lieutenant?) made it to the Team that had been bombed (perhaps they moved up in the end phase of the previous turn). The results of the bombing were one KIA, 1 Seriously wounded and the others were just fine – though they kept talking really loud and shouting “WHAAAAAT?!” every time someone tried speaking to them…

Antoher British unit apparently had a Serious Wound and a Light Wound – I’m guess this, and the Soviet mystery casualties were among the teams at the south edge of the village that were exchanging fire. 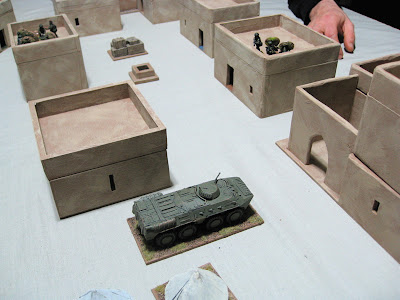 The BTR-80 fired at Brits in the building immediately to their front. The BTE fire was ineffective, but the British return fire took out the vehicle commander (who was unbuttoned)!

The soviet Sniper took out another Brit – likely one that had just gotten back up. And the other soviets at the north end of town poured fire into the bombed building

The Soviet vehicle commander turned out to be seriously wounded.

The British Lieutenant was okay, the medic Lightly wounded, and another was KIA. 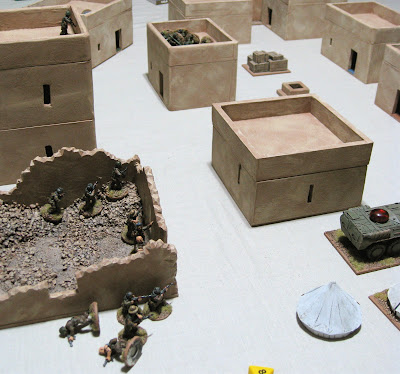 I’m not sure what else was going on in the turn…? 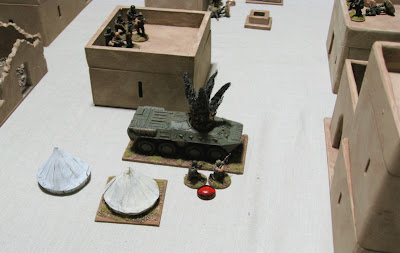 The Soviets moved up in the center and apparently shot up some more Brits… somewhere….? 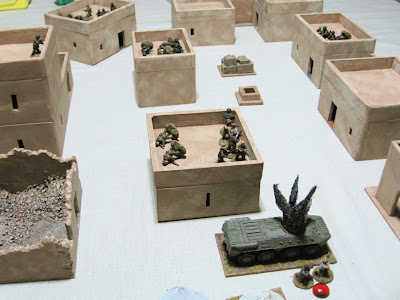 Among the British Casualties taken prisoner on the south end of town two were Seriously Wounded, two were Lightly Wounded. 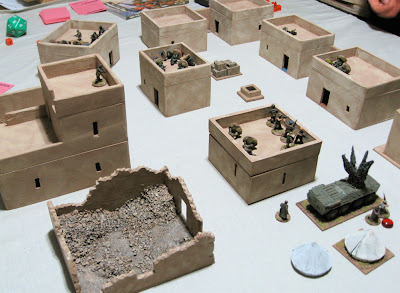 I can’t remember what else went on in the last turn… Things were going very badly for the British….

Among the other Fog of War cards that were in the discard pile (that I can’t remember when they came up were: Shuffling the Stack (The Brits were no longer allowed to call on any further air strikes… had they been allowed to do so…), Fire! Fire (a building occupied by some British burst into flame and had to be abandoned), A Break In The Clouds (negating any previous weather related FoW cards), and “Should We Turn This On?” (Something to do with Ground Surface Radar - I had to make a TQ test – failure would have meant the Brits got a free Heavy artillery fire mission on one of my teams, bu,t as I passed, it just meant the Brits couldn’t use Out of contact Movement).

A Fun game. Starting to get the hang of things. After playing this I’ve had a thorough re-reading of the rules we’ve used so far… it cleared up a few things… I realized I was doing a few things wrong…

I’m kind of prepping and priming a number of things that arrived this week and jumping around – back and forth between Africans, British SAS and a half dozen assorted vehicles in various stages of assembly and paintage…. Who knows what I’ll post next… Maybe it’ll be a report of Saturday’s game!