Feeling a little less like dying this week, I ran another Force on Force game on Wednesday evening. I wanted to try out the vehicle rules but didn’t want to dive into a full-blown, combined-arms battle, so I ran a modified version of the Soviet Assault scenario from Cold War Gone Hot.

I still haven’t gotten balance down in this game or a clear idea of how many points should be awarded for which, so I have to admit the victory points I just pulled out of my ass and the forces were based on what I had… There are two T-80s in there… but I called them all T-72s as that’s what the majority of them were…

A Soviet motor rifle division has smashed through the front line at the Inner German Border! Tanks are pouring through the gap to exploit the break through!

Special Conditions:
- The river is not fordable at any point. It may only be crossed at the bridge.

The soviets are to advance through the village and exit as many tanks off the far end of the table as possible.

Gary took the Soviets and I too the Americans. 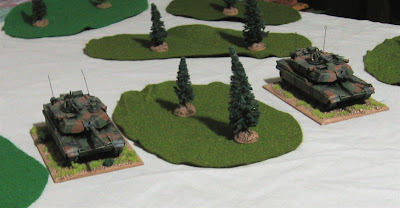 American M1 tanks lurking in the woods hoping to stem the tide of the Soviet tank assault. 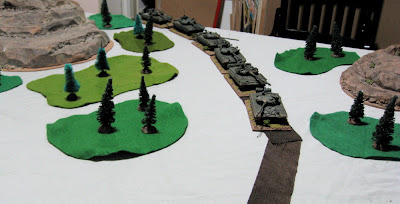 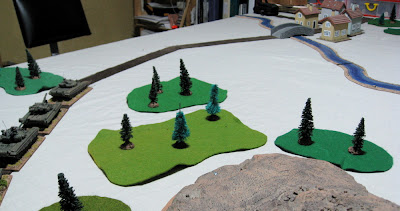 A small German village and a bridge across the river running down the middle of this picturesque valley. 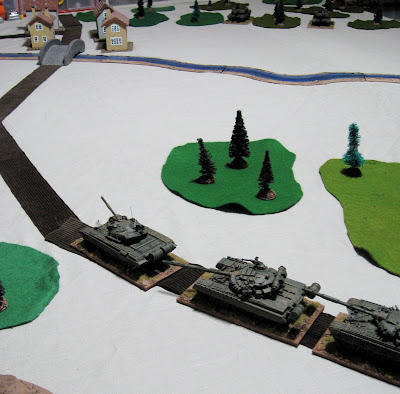 The M1s lurking in the woods across the river. 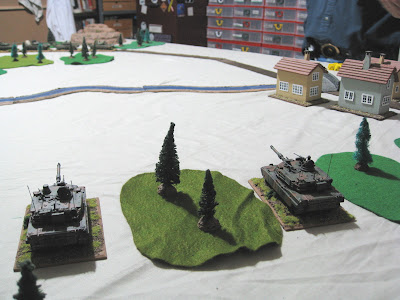 And finally a view from the American position…

I took a lot of pictures at the beginning but then forgot to take more as play went on as I was constantly trying to look things up (that's not to say the rules are preticularly comples, I'm just an idiot with  a bad memory, and I'm also the only one with the rules...)

I think all but one (or two?) of the Soviet tanks passed their TQ roll to stay unbuttoned. As their orders were to press forward and pass through this valley, Gary decided to drive them all through at Rapid Speed. 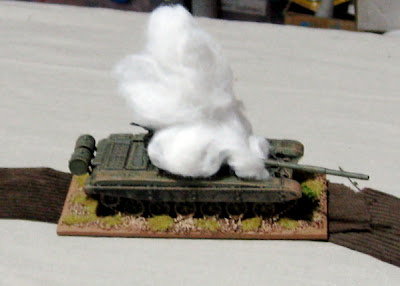 First shot – vehicle killed. The Gunner was injured, but the Commander and Driver managed to get out unscathed!

T-72#2 rolled out into the open M1#2 attempted to react and failed! (which, I think, means they didn’t get to fire or make anymore reaction attempts for the rest of the turn…?) 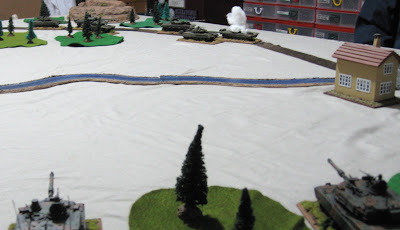 T-72#3 rolled into the open. M1#1 attempted to react again. Fired on and knocked out the T-72’s main gun! The crew did a bail check, but passed. 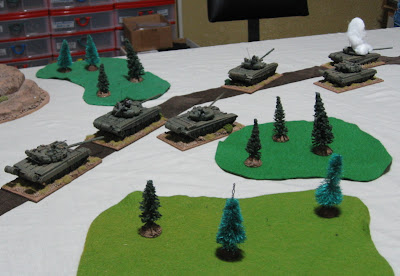 End of turn one; one T-72 knocked out, another with a main gun desotryed.

The Soviets retained the initiative. The Crew from T-72#1 did a first aid check on their gunner and turned out that he was okay – what he thought was bleeding turned out to be some hydraulic fluid that had splattered his legs… Despite the situation, they probably had a good laugh about it. 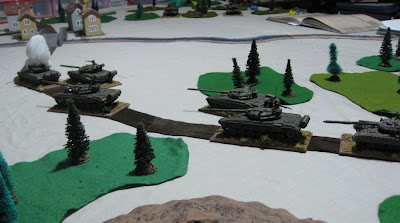 Checking for buttoning up, I think all off the Tank Commanders passed – all having a good look outside to see what’s going on!

T-72#2 attempted a rapid move attempting to get to the bridge and the cover of the village. M1#2 reacted firing on the T-72. The T-72 brewed up; the Gunner and Driver were injured but the Tank Commmander successfully bailed.

T-72#3 also attempted a rapid move attempting to get to the bridge and the cover of the village. M1#1 reacted, firing on the T-72.  T-72#3 also brewed up; the Gunner was injured but the Tank Commmander and Driver successfully bailed.

T-72#4 rolled out into the open also attempted a rapid move. M1#2 reacted firing on the T-72. T-72#4 also brewed up (can you see a pattern developing here…?) the Tank Commmander was injured but the Driver and Gunner successfully bailed.

T-72#5 rolled out into the open and tried to fire on M1#1. The T-72 actually got to fire first! Shots were exchanged but the round of fire was inconclusive – no hits!

T-72#6 also tried to make a rapid move around the burning wrecks of the lead platoon. M1#1 attempted to react but failed. 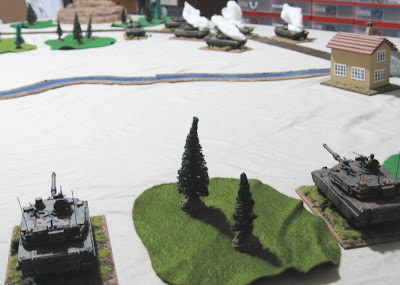 End of Turn Two: four knocked out T-72s smoking in the distance.

I need to get/make some better burn markers…

The Soviets again maintained the initiative. 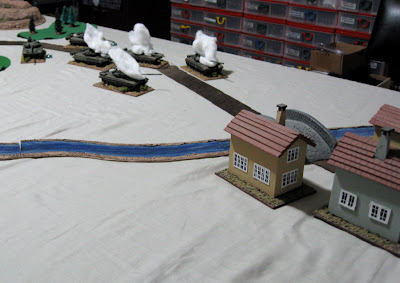 The remaining T-72 commanders remained unbuttoned to have a good view of the developing situation.

T-72#6 moved up behind the wreckage of the rest of the force. M1#1 attempted to react but failed – rolling a 1 – bringing out the first Fog of War card, which was FIRE! FIRE! One of the buildings in the village took a stray round and caught fire.

I think the remaining Soviet tank retained the initiative…?

T-72#5 checked their crew members: the Tank Commander was Killed in Action (he probably never made it out of the tank as it brewed up), and the Driver was Lightly wounded.

T-72#6 made one last ditch attempt at a dash for the bridge and the cover of the village. M1#1 reacted. This time it was the Soviets turn to roll a one on the reaction roll – drawing a Fog of War card; something about soviets taking time out to do some looting… not really applicable…

Then the M1 fired… 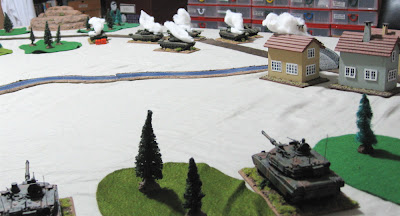 Scoring a Catastrophic Kill – blowing the tank up and killing averyone inside! KA-BOOM!!! 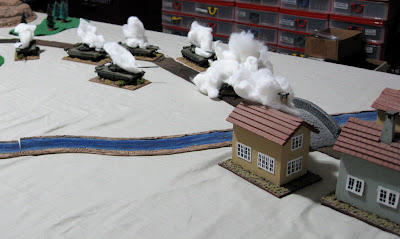 Well… that was a rather one-sided affair. I suppose if one were really grim the Americans could have spent some time machine-gunning the surving tank crews as they ran for cover… But at this point - early in the war – there probably wouldn’t be the sort of bitterness that would precipitate such action. I imagine the Americans were probably thinking “Poor, dumn fü¢kers…” and just glad they had M1s and weren’t in those T-72 death traps!

I think I’ve got the vehicle rules pretty much down. Still trying to get my head around some aspects of the action-reaction system. I have to add in air support and artillery and asymmetric operations next…