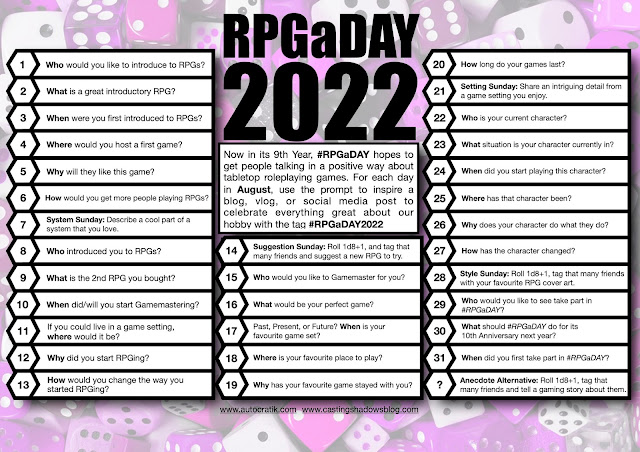 Day 13 - How would you change the way you started role-playing?

My initial answer for this was “Given the circumstances of who I was and where I lived and the time it was, I’m not sure how it could have BEEN different…?”

Also, even if I could change certain circumstances, I can’t help thinking about the “butterfly effect”. IF those things were changed, where would I be today. Would I have met all the fantastic people that I did meet…? Would I have experienced ALL of the things I did…? I wouldn’t want to miss out on so many of those people and experiences.

However, IF were are only limited by our imagination AND any of those circumstances COULD have been different AND I could still somehow meet all the same people and play all the same games…?

I guess, under those conditions, the one circumstance.. or SET of  circumstances (which wasn’t really about gaming, but has had a HUGE affect on my gaming from the get-go) I might change would be getting diagnosed with ADHD about 40 years earlier than I was and finding a medication that worked. Or maybe just not having ADHD at all (if we are only limited by imagination). How would things have been different if I’d been able to stay focused enough to actually READ rules and READ through the adventures, explore a set of rules or a setting more thoroughly, and then actually stick with those adventures and campaigns to see them through to reasonably satisfying completion, instead of abandoning things and skipping ahead to the next shiny new idea that popped into my head!?

Of course, without ADHD, would there have been the ENDLESS TORRENT OF NEW IDEAS that ended up as inspiration for so many of the games I’ve run over the years…? Without it would I have been as good at improvising and making shit up on the fly?

Probably best NOT to dwell on it. I have done FAR TOO MUCH of that already. All the could have, would have, should haves…. Onwards and upwards my friends.

Reflecting on the last two weeks, however, I think this and the whole line of questioning about where and how we started has really just been to reflect on our own experiences and how things went down and how we could collectively make role-playing a better experience for newcomers. And I think that comes down to compassion and patience and understanding that your reality isn’t everyone else’s reality.

For some of us that reality is having hundreds of new ideas EVERY WEEK and sometimes that meant showing up at my place to discover we were making new characters and embarking on a whole new campaign (however short-lived) without ever wrapping up the one we’d just been playing the week before… I am so grateful for those that humoured me over the years and just buckled in and held on for that wild, wild ride, no matter where it took them!

I realize that calling for compassion and empathy and inclusion is probably triggering for the gate-keeping, old school, retro cranks, but… fuck em… They are everything that is wrong with role-playing and gaming in general. I am so glad the industry has finally realized they are a small (though vociferous) minority and will NOT be the ones that keep them in business and have decided to largely leave them behind and move towards inclusion and representing diversity and massively growing their market instead of relying on stingy old bastards that will all soon be dead…

Day 14 - Suggestion Sunday: Roll 1d8+1 and tag that many friends and suggest a new RPG to try.

I’m not sure how to even do this really… my friends are spread out over a variety of different social networks… and I don’t think any of them read this blog anymore… I used to feel like Barney on How I Met Your Mother - people constantly asking questions and me thinking “did’t you read my blog…? I JUST posted about there yesterday!?”

Day 15 - Who would you like to Gamemaster for you?

Like within the realm of reality or if I could get ANYONE to run a game for me…?

If I could get ANYONE, I’d love to play in a game run by Wil Wheaton… That would be amazing.

I guess if Wil wasn’t willing or able, I’d totally love to get in on Joe Manganiello’s game…

In the realm of reality… I don’t know… I do kind of like running the games myself.

I am so here for the day when Trevor feels safe about in-person gaming again, however, and I would not turn down an invitation to try anything he wants to run... (fellow I met though a local RPG group, who moved to town DURING the pandemic)

My son Finnegan is an AMAZING GM - if he weren't already so busy with the TWO WEEKLY D&D games he's running, I'd probably cajole him into running something for me and my friends again!