Another slow to start month. Despite a SUPER-LONG weekend to kick off the month we didn't get playing games until the 10th! This was partly because we all took turns being sick starting with Amanda and Keiran on the 4th, Finnegan was sick the next day, and, just after I thought I'd somehow dodged it, I got sick on the weekend!? Sunday I was feeling well enough to play a game, so we got back to playing some Warhammer Underworlds. 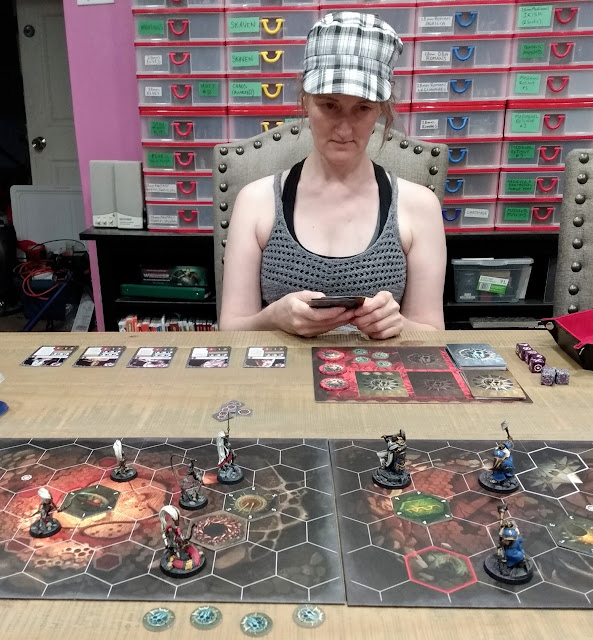 We played in Beastgrave, with Amanda fielding her Murder Grrrlz and I tried out Ironsoul's Condemnors. I thought maybe I hadn't tried them before, but when I went to log the play on BGG, I realized I had played them ONCE before. As with the previous time, I played with their standard deck, as-is... and... it wasn't awful.

I have NOT had good luck with ANY of the Stormcast warbands... like... EVER. The DAughters of Khaine (that are my usual opponents) somehow just dance circles around them and cut them to ribbons!? I don't remember a single game where they weren't absolutely WIPED OUT!?

The last time I played THIS particular warband, Amanda won 15-1...

The first Round didn't go great... I was playing kind of "stow and steady" and letting them come to me... which COULD backfire as Amanda has all sorts of objective cards that can gain her points just... being in different places and surviving... I think I did take out Khamyss... who CAN be BRUTAL, but is a bit of a glass cannon... 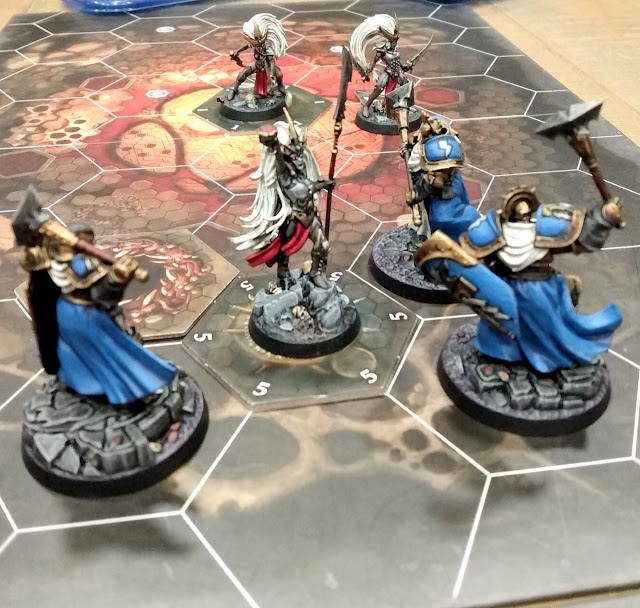 The second round went better... I took out Kyrae in my first activation and then kind of surrounded Morgwaeth. By the end of Amanda's first activation on Round Three looked like... Amazingly, Morgwaeth survived TWO rounds standing there... the first Gwynne Ironsoul hammered on her - three dice - with two helpers and a smash attack, only one in six is a failure (the flury side), I rolled three regular hits and Amanda rolled a crit (which trumps everything!?) Ironsoul also had an upgrade which allowed her a reroll of one attack die on the first attack made each turn - and rolled another regular hit...

For some reason, Morgwaeth stuck around!? She was not so lucky the next activation... 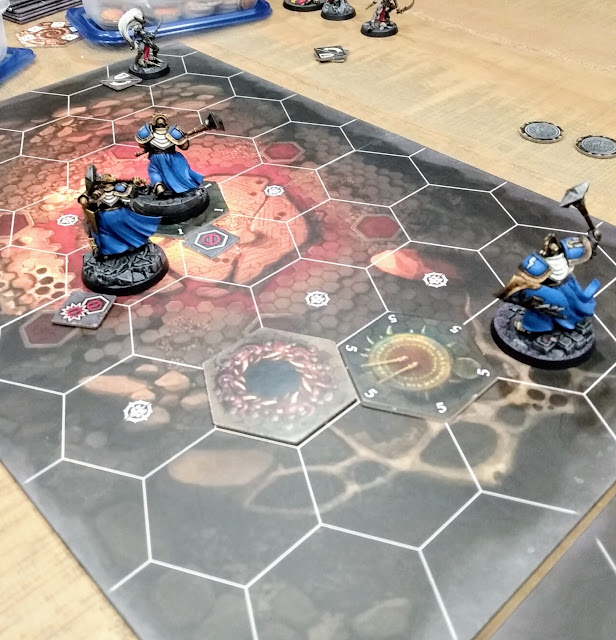 Here's how things looked at the end of Round Three... Kyrssa, the last one standing, made a run for it, as there was NOTHING she could do and sticking around to get SMASHED by the Stormcast would just give me more points!?

So... I FINALLY won a game with Stormcast Eternals! The final tally was 11-5!? Probably a combination of me being exceedingly lucky and Amanda being out of practice and/or just having an off day... I think with a bit of deck editing Ironsoul's Condemnors could be pretty brutal, though! 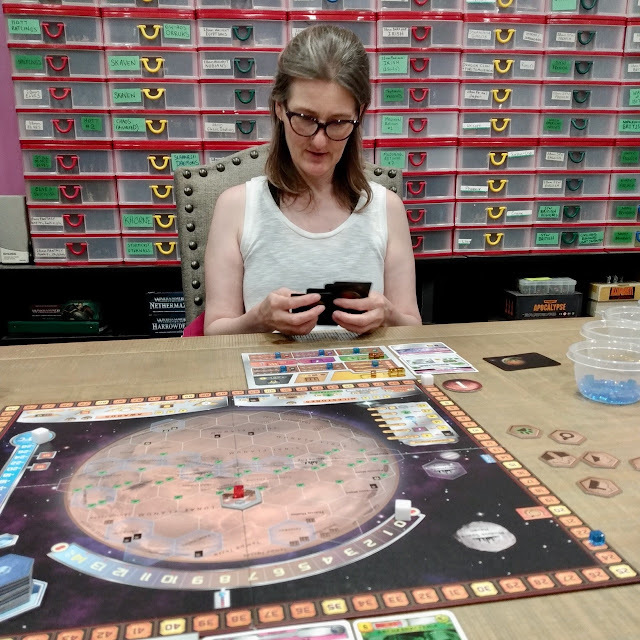 It got brutally hot here as the week went on. So Tuesday evening we decided to hide in the cool basement Games Room and play Terraforming Mars. 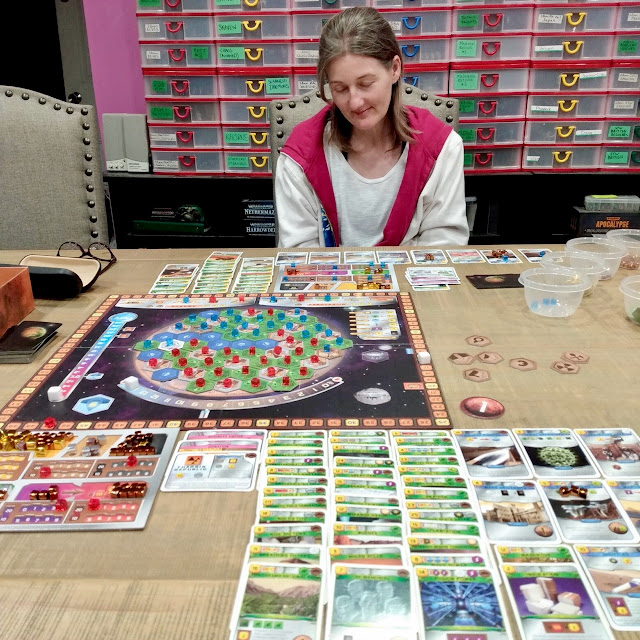 It was a LONG game - went for SIXTEEN turns (I feel like that's probably a record for us - NEITHER of us were producing heat. I'm sure by the end HALF of the raising of temperature was done by Standard Projects. We had all the oceans out before the mean temperature rose above -20°C!? (Not sure how THAT worked!?) 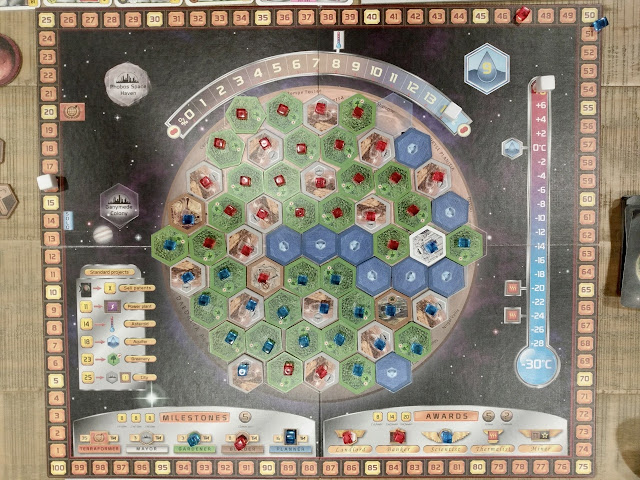 Mars was definitely looking well and terraformed by the end of it, though! 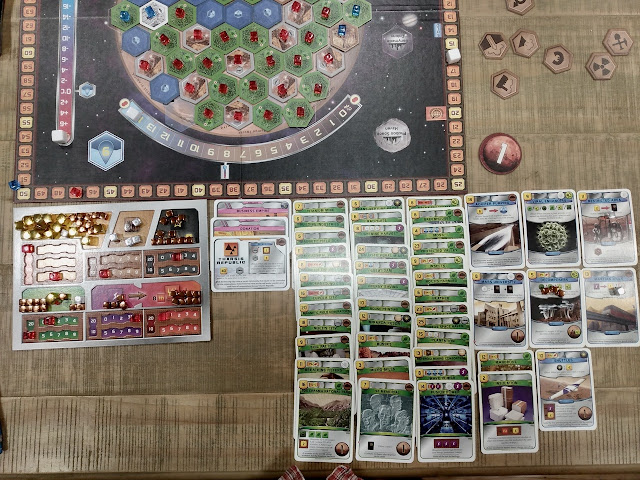 Our friend Kurtis came over and played a few games on this rainy Monday evening. We played Kingdom Builder (which I forgot to take a picture of) 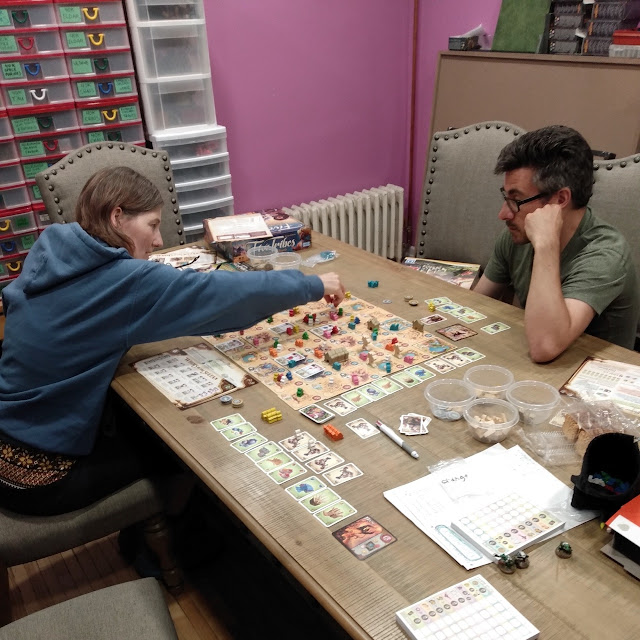 In both games Kurtis and I were pretty close... and Amanda won by a BUNCH!? 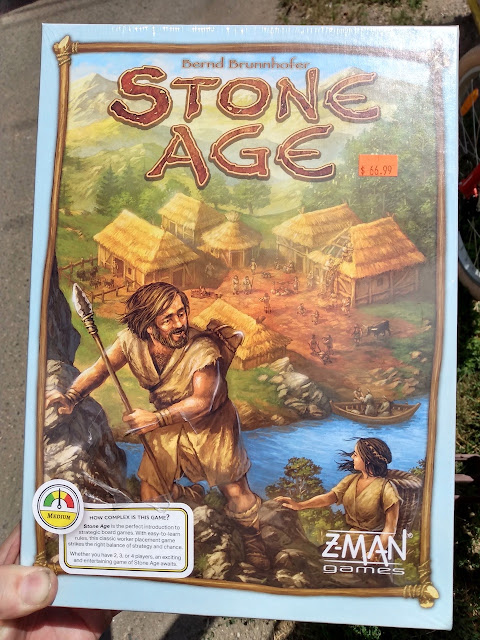 Didn't play a game this day, but I bought one. I kind of HOPED we'd try it out in the evening, but didn't end up getting to it... Kill Team boxes aside, I can't remember the last time I bought a game...? I have bought two expansions for Five Tribes in the last year...? Other than that, I think the last games bought were Century Golem and Wingspan for Amanda's birthday last year!?

Amanda's played Stone Age a few times at ToonCon and I played it once. It's been a game that Amanda thought would be okay to get, but out FLGS hasn't had any in for YEARS!? Z-Man games just wasn't reprinting it or something!? A week or so ago, I saw on their Facebook page that they finally got in copies!

Thursday Other Tim and Treena came over to play games! I can't remember the last time we saw each other...!? I feel like the last time we played games was the ToonCon just before the pandemic shut everything down!? 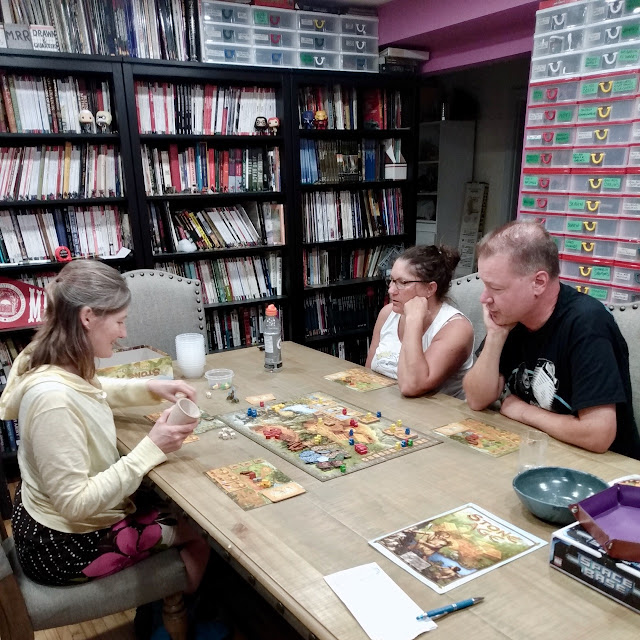 We did get to try out Stone Age! Treena and Other Tim have played it a bit, so Other Tim just crushed it. 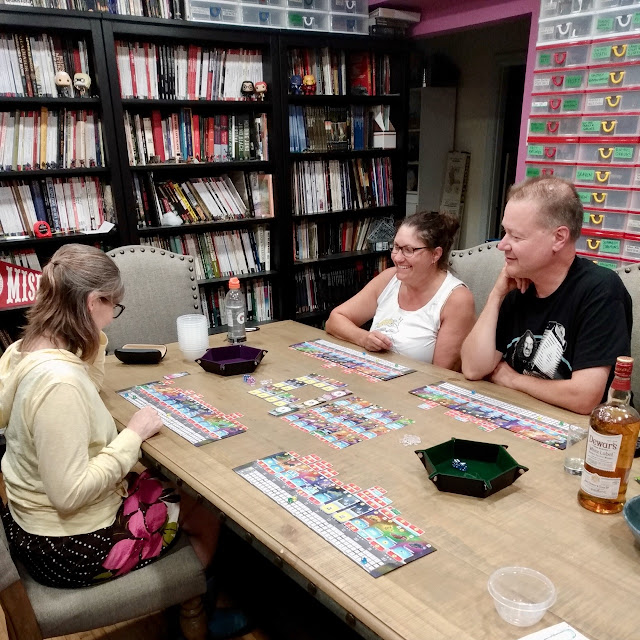 Afterwards we tried out a game they brought called Space Base which was interesting enough. I kind of won... largely because I was lucky early in the game and got a few really good ships... also I had a total brain fart and for a turn or two was taking more for rewards when others rolled dice than maybe I should have... which might have changed things a little bit... I always ended up with waaaaaaay more credits than I needed to purchase any of the ships I did before I realized I ha made some mistakes, so it might not have affected things...? 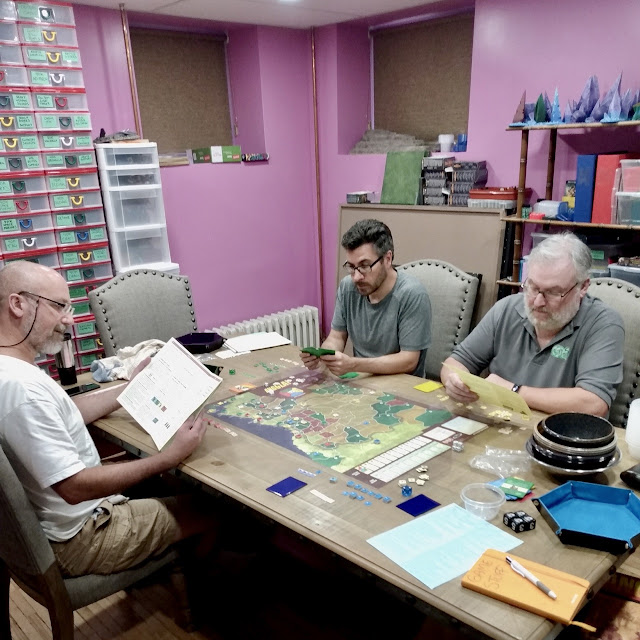 This past Sunday, Brent, Kurtis and John came over to play Angola!

We haven't played this in about four years... but for a while it seemed like we played it every six months - in July or December - and it seemed to coincide with Kurtis changing jobs!? Kurtis sort of changed jobs again this summer (sort of... he was just made the permanent University Veterinarian - a position he'd been holding as "ACTING University Veterinarian for a few years now) - but it WAS an official change of position, so I suggested we should probably play Angola.

The game is played with four and those are divided into two teams of two. One team play the MPLA/FAPLA, the soviet-backed communist forces controlling Angola at the outset of the war, and the other team plays UNITA/FNLA, the western backed opponents.

The previous four times we've played, Brent and I have played the MPLA/FAPLA with me playing the FAPLA three of those times all but one of those times we had randomly determined  who would play which faction. We joked a lot before that it would probalby be the same teams and when Brent rolled MPLA for his faction, it looked like it might happen again.

It didn't, though. I ended up playing UNITA, John played the FAPLA, 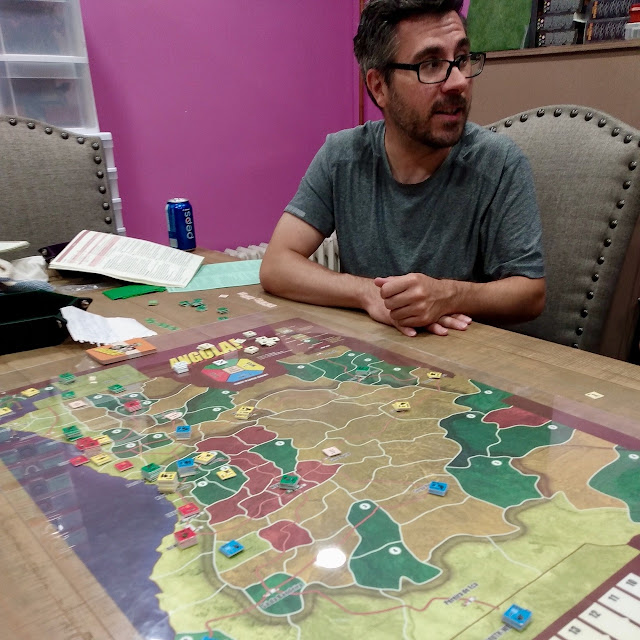 ...and Kurtis was my partner this time with the FNLA

Now, I've never read the rules, I just bumble along as best I can.. I just move stuff around and when battles happen, they tell me what to roll and when. It has a fairly simple and abstract combat system and the activation system is fascinating leaving you always wondering what your opponents might do next... and sometimes wondering what YOU might be doing next, if you forget what you put in your activation deck and in what order!?

Each turn you build a deck of a set number of cards (4-7 depending on what turn it is - starts at 4 cards, goes up to 7 by the end of the game) each represents one of the columns you have or "fifth column" which allows you to move a group of units not in a column and there are command cards which can allow you to swap column markers of two columns that have not yet moved (I've never used those) and one or two pass cards that MUST go into a deck (UNITA has two pass cards, everyone else has one). Once the deck has been made and the turn started you are not allowed to look at what's in your deck. A start player is determined somewhat randomly (d6, 1-4 corresponds to a player, 5-6 is the player to the left of the previous turn's start player) that player starts by revealing a card from their activation deck and activating that column or passing as indicated on card and then play continues clockwise with each other player revealing one card at a time...

Every faction gets one home base at one side of the board. UNITA starts in Southwest Africa, MPLA starts in Luanda, FNLA starts in Zaire, and the FAPLA starts in a town in Eastern Angloa... then three others are drawn at random... 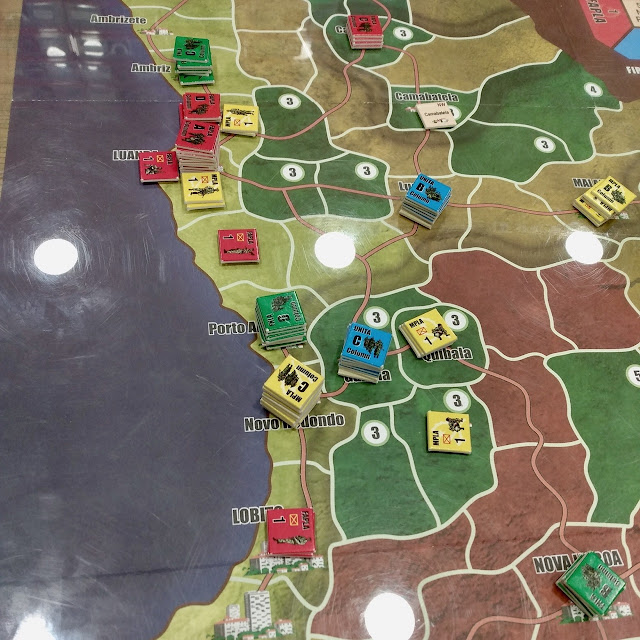 So the intital set up was CrAzY - UNITA and FNLA had control of four towns surrounding Luanda! One of the game-ending-goals is for UNITA or FNLA to capture Luanda. I don't think it's happened in any game so far but it looked pretty perilous!

Nothing really happened there because there was a LOT of troops and equipment in Luanda and making a move on Luanda would mean giving up your position in whatever town (which one of the columns of FAPLA troops that were also in teh area could swoop in and seize.

Looking back, maybe we SHOULD have put more pressure on Luanda with direct attacks 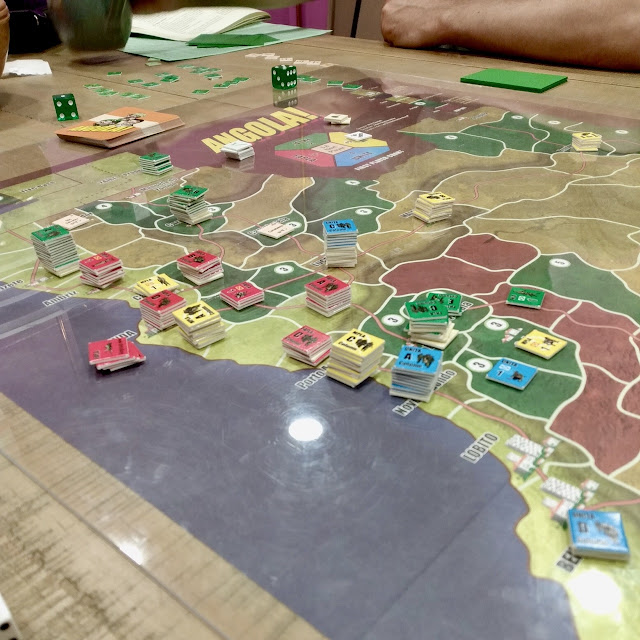 As it was, for most of the game these just stayed as heavily armed enclaves that grew to massive sizes, just staring each other down. One of the UNITA columns made it's way up the coast clearing communist forces out of ports along the way... only to be pushed back a bit in later turns...

In the end UNITA and FNLA won, AGAIN! I think it was turn nine after six hours of play.

That's it for July. Didn't get in as much gaming as I'd hoped... Or painting as that last burst of painting energy ended up being very short-lived. Very little has been finished since then. WEll, very little MINIATURE painting has been happening... I HAVE been VERY BUSY with other sorts of painting in July!!